Access to Health – A Privilege - and Two Brothers Planning to Collaborate

When I was growing up, eating healthy and physical fitness was something that was talked about fairly often in my household. I played sports throughout my childhood and remained very active. And for the most part, this was the case for everyone in my family. I always had access to a gym, fresh fruits and vegetables. Having the ability to eat healthy is a luxury, and I never really realized how much of a privilege it was until I was exposed to some statistics. “A recent multistate study found that low-income census tracts had half as many supermarkets as wealthy tracts. Another multistate study found that eight percent of African Americans live in a tract with a supermarket, compared to 31 percent of whites” (Bell). I would love to say that a statistic like this really stands out but it doesn’t at all. Minorities, particularly African-Americans, as a community, are extremely disadvantaged when it comes to healthcare as compared to their white counterparts. 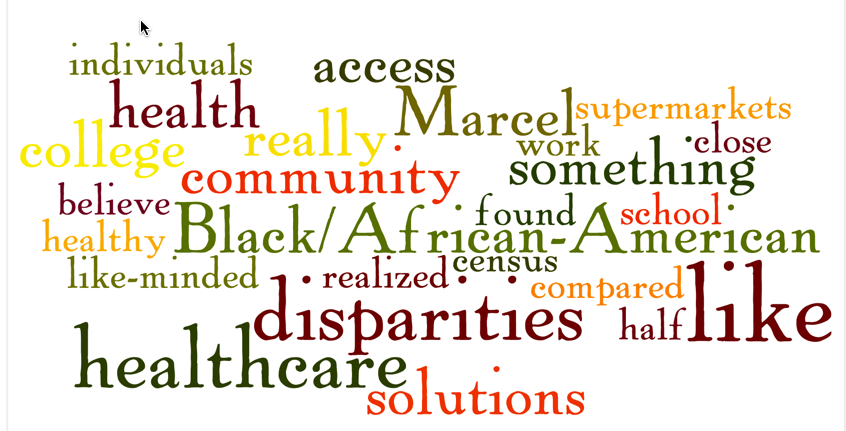 When I first began to understand the notion of health disparities, I was intrigued and motivated. Why should citizens of the United States already a decade and a half into the twenty first century not have access to supermarkets close to their places of residence? Over time, I have realized that this is something I would like to change. Closely approaching my senior year of college, I have had the privilege of completing two ethnographic studies that examine pharmacy and supermarket access as well as examining health related racial disparities. Both of these studies examined the neighborhood of East Liberty in Pittsburgh, Pennsylvania which according to 2013 census data is around 74% Black/African-American.

I feel so personally invested in the discussion of healthcare disparities and healthcare equality for all because I identify with the Black/African-American community. After college ,I would like to further my knowledge on these subjects by pursuing my Masters degree in public health. I believe my future education will give me not only the tools and resources to think of potential solutions to my community’s problems but also allow me to work with other like-minded individuals.

One of the like-minded individuals I hope to work with in the future is Marcel Souffrant. Marcel and I went to high school together and have been close friends since around 2011. He is currently planning to attend medical school following graduation from college in the spring of 2016. In a true collaborative effort, I believe we can both help craft potential solutions to these healthcare disparities that currently plague the Black/African-American community. Two Black/African- American men working together to create solutions to these chronic issues is something I am really beginning to like the sound of.   Follow the journey along at @myhealthimpact for this, other health-tech topics and voices of young people like me and Marcel.